Recorded on April 4th and 6th, 2013 at A Red Room, Hamburg
Recorded, mixed and mastered by Boris Vogeler
All music by Büttner/Ulher (GEMA)
All pieces p+c 2013 by Büttner/Ulher
Photo by Gregory Büttner 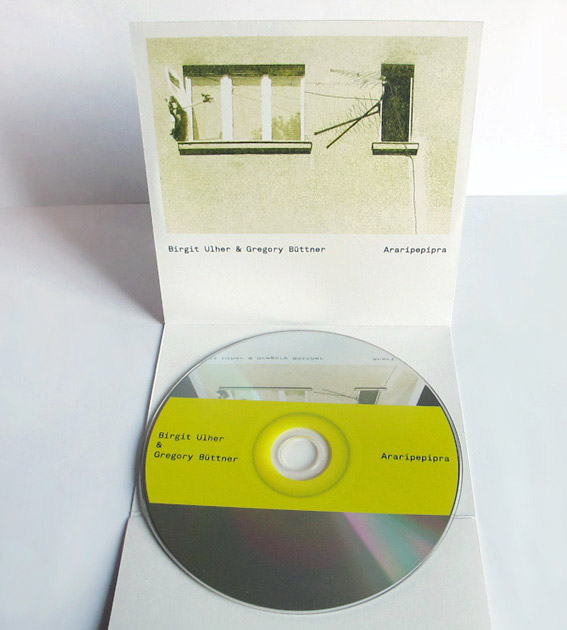 THE SOUNDPROJECTOR (UK)
Fine minimal blathery from Birgit Ulher and Gregory Büttner on their Araripepipra (HIDEOUS REPLICA HR4), which showcases eight cuts of them doing it in A Red Room studio in Hamburg in 2013. Birgit is mostly playing her trumpet when she’s not twiddling the dials on the radio and fiddling with objects scattered about the formica table, while Büttner is concentrating all his effort on his computer, objects, and fan. Clearly this is one of many interesting intersects where improvised music meets sound art, quite frequent in today’s landscape, and one happy outcome is that the two genres (if such they be) discover they have a lot of common ground. It’s also significant that both of them single out the loudspeaker as an instrument, pointing up the “acousmatic” qualities of this highly abstract music. And Ulher even uses the speaker as a trumpet mute on half of the tracks. Can you imagine wedging one of these micro-speakers into the bell of your instrument? Through this action, it’s as though she’s trying to forge some artificial bond between man and machinery, using her brass device as an interface. In all, a strangely compelling if rather samey set of tracks, with an extremely “clean” sound to the production, due to Boris Vogeler’s recording and engineering skills. I also like the cover image (photo by Gregory) which suggests an old coaxial TV aerial and modern satellite dish yearning to make contact with each other across a void…a poignant reminder of the “transitional” state we are currently living through, where the digital may dominate but traces of the analogue are still to be found. From 8th September 2014. Limited edition of 200 copies.
Ed Pinsent, May 23, 2015, thesoundprojector.com


VITAL WEEKLY (Dutch)
The work of Gregory Büttner can be separated into compositions of an electro-acoustic nature and improvisations, mostly with other people. This CD falls into the latter category. There are eight pieces here; four have a different set-up than the other four. On four of these Birgit Uhler uses trumpet, radio, speaker, objects and Büttner plays computer, loudspeakers, objects and fan, while on the other four he plays computer with output to speaker and Uhler trumpet and speaker as mute. I am not sure why they decided to mention it like this, but surely it suggests that these latter four pieces are more minimal, due to their set up. Without looking too much at the cover, I must say it wasn't easy to spot which track was what; in fact, as a game, I tried noting it down and got most of it wrong. So there you go. The music is probably what you can think of if you know their previous work. Lots of silence, lots of interesting treatments on the computer and the trumpet being used as both an instrument and an object, played with other objects, or simply objects used to hold against the horn of the instrument and mute/alter the sound. Uhler is a great player in that field, I think and her interaction with Büttner's computer and isolated speaker sounds works very well. Each of these eight places is a place of its own; each explores its own field and something that is with limited means. The recording is expertly done: room acoustic doesn't seem to play a role of any kind, and all of this is recorded close to the microphone. This gives the music a very nice presence and a beautiful sense of directness. An excellent release. of granular synthesis. Five excellent compositions and in no way I was thinking this sounded like a demo.
Frans de Waard, vitalweekly.net/948


WE NEED NO SWORDS (UK)
At first, it sounds like a snooker match next to a construction site. A series of heavy, satisfying clunks, interrupted by terse sheet of white noise. Metallic gurglings and flutters of breath give way to strangely warbling bursts of static. There are more sounds, creaks like a violin-tuning peg being slowly twisted. A gassy roaring.
This is Birgit Ulher and Gregory Büttner’s Araripepipra. Ulher plays trumpet, radio, speakers and objects. Büttner plays computer, loudspeakers, a fan, and objects. It is thrillingly abstract yet surprisingly tangible music, a legacy perhaps of the physicality of the devices that made it. The eight compositions are detailed and controlled, yet expansive too, the pieces unfurling slowly from the speakers before taking shape in the air, clicking and purring and humming.
When I saw Ulher play a short solo set in London earlier this year, her playing teetered on the edge of sound and silence yet she seemed determined to introduce a real sense of tension into this dynamic. Trumpet mutes were hooked up to radios and speakers, introducing shortwave hiss and motor noise even as they suppressed the sound of the trumpet’s sound. Metal sheets, clipped to the horn, vibrated at the slightest provocation. I want silence. I don’t want silence.
There’s similar stuff happening here, although the presence of Büttner – with whom Ulher has been working since 2008 – makes the canvas deeper and wider. There’s less silence, more space. The sounds are like objects hanging in the air, beautiful, gnarled, unknowable.
The duo’s chosen practice is a key determinant for this enigmatic sound, Büttner generating sounds from his computer or object, which are then fed through speakers. Ulher uses these speakers as mutes, alternating them with her usual preparations. This all means that you can never tell from whom the sounds are originating or how they have been modified. They are ‘not-trumpet’, ‘not-object’, ‘not-computer’, and, in the process, become wholly individual.
On Igopogo, the chorus of breathy, hissing, airy tones sound strangely organic, like a huge animal stirring in its sleep. The clicks, pops and squiggles are like tiny insects dancing around it, glistening points that only emphasis the vast bulk surrounding them. In Aye Aye, the exhalations and wheezes take place against a backdrop of fluttering and whirring, the sounds of a forest at night, alive with moths and insects.
By distancing the sounds from the people who created them, Ulher and Büttner’s methodology also frees the pieces from any human agency, creating a kind of Zen sonic field. It’s the opposite of a kind of post- or anti-human machine music, rather a sense of blissful openness, a feeling retained even on busier pieces like Kouprey where its slithers, bustles and rumbles create a joyful, carnivalesque tapestry.
Paul Margree, October 13, 2014, weneednoswords.wordpress.com


JUST OUTSIDE (USA)
It's a bird. :-) The titles of the other seven tracks refer to creatures as well, some near extinction, some extinct, some crypto-zoological. It's tempting to hear the sounds generated by this pair (Ulher--trumpet, radio, speaker, objects and Büttner--computer, loudspeakers, objects, fan) as evocative of real or imagined sounds created by these animals--actually, it's rather fun to do just that. The pieces are in line with what I've previously heard from each musician, individually and as a duo: fairly active, bubbling, possessing a fine sense of timbre and pacing. "Kongamato" stands out for its long tones, very welcome; easy also to imagine them accompanying the titular pterosaur in flight. Good, crunchy, imaginative music, another in a string of strong releases involving Ulher, a musician who listeners should definitely check out if they haven't already.
Brian Olewnick, Just outside, October 13, 2014


NEURAL (Italy)
This interesting setup consists of a small speaker being used in two different ways: to play sounds from Gregory Büttner’s computer and as Birgit Ulher’s trumpet mute. This results in the trumpet functioning as both a transmitter and a receiver, modulating the sounds produced by the speaker as it plays. A wide range of sounds has been produced: metallic clanks, squeaks, wheezes, seizures, gaseous emissions and a variety of vibrating pulses. The catalogues of good sound recordists move beyond simply documenting interesting sound events and evoke an attitude of composition through representing a non-trivial personal taste. Ulher and Büttner are certainly not new to this field. The former is very capable with action-oriented tools and resonant bodies, while the latter is more experienced with computers, microphones and speakers. The duo have spent lots of time experimenting with various iterations of electroacoustic setups and are able to imbue their work with a sense of “taking the stage”, a feeling reinforced by the fact that this album was recorded in just two sessions at the Red Room in Hamburg. The title of the whole project, as well as the first track – Araripepipra – refers to a bird, but the other seven are all dedicated to creatures in danger of extinction. There is a feeling of mimicry running through the work, which either evokes something real or something “imagined as real”, playing with the concept of endangered animals from an ontological perspective. 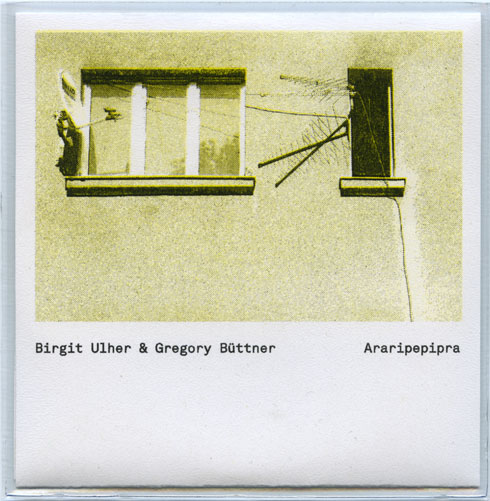